THE FOLLOWING STATEMENT WAS ISSUED BY MARIELENA STUART DURING HER CAMPAIGN FOR THE U.S. SENATE: 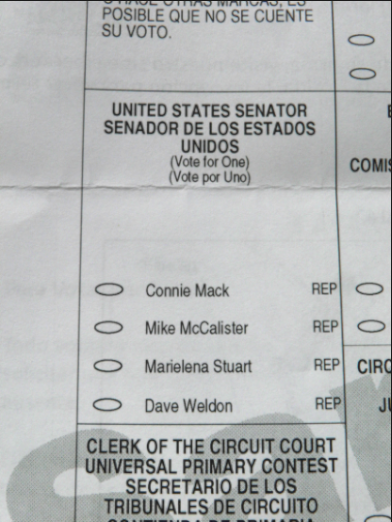 “The basis for all public policies should not rest on ambiguous catch phrases… but rather on the Commandments of God and on the Natural Law– which binds all men, for all times, and in all circumstances.” —MARIELENA STUART, Republican Candidate for the U.S. Senate 2012 (FL)

ON TAX MONEY FOR ABORTION:

MARIELENA STUART:   The foundation of my Senatorial campaign is based on the inviolability of all innocent human life – born and unborn.  As U.S. Senator I will oppose the use of tax funds for abortion across the board, without exceptions.  I will lead in enlarging the current limited dialogue,  which is only focused on abortion insurance coverage– to include a frontal and vigorous attack on ALL federal anti-life legislation –most especially Title X domestic and foreign population control programs.

MARIELENA STUART:  The marriage of a man and a woman was instituted by God from the beginning as a means of perpetuating the human race.  The traditional family of husband, wife, children and extended family members provides the best human environment for the upbringing of god-fearing and loyal citizens.  As U.S. Senator I will initiate and support federal legislation directed at stabilizing and supporting traditional marriage of one man and one woman, and family life.  I  will oppose all anti-family legislation designed to undermine marriage between one man and one woman and the traditional family.  I will oppose polygamy in any form.  I will oppose any attempt to redefine marriage to include homosexual partners.

MARIELENA STUART:  I will fight to restore a firm economic foundation for national re-building– and in order to secure a strong national defense.  These will be two of my national priorities as your U.S. Senator.   In addition, I will oppose any and all unconstitutional and dangerous federal programs including “Obamacare,” and work for the reduction of wasteful government spending and the elimination of pork-barrel appropriations  and  projects.

Americans have become pawns in a vast economic scheme “propped up” by borrowing money from other countries—most significantly from the Communists in Beijing.  As such, China is the biggest investor in the U.S. debt— and our most dangerous economic and military enemy.

It should be evident to every thinking American, that our nation’s debt has placed our national security at risk.

Americans want and deserve an honest and forthright solution to the national debt. This includes the passage of a crucial Balanced Budget Amendment.

Tax increases are not the solution to the national debt.

“Spreading the wealth” and “increasing taxes on the rich” is a socialist, if not communist approach—which does not help the poor.  In fact, it further erodes our economy.   The rich should not be punished for their success— and Americans must not tolerate policies which fundamentally attack the private sector and our free enterprise system.  We must not allow the socialist bureaucrats in Washington to divide Americans through class warfare.

MARIELENA STUART:   As a former political refugee from Communist Cuba I waited years to enter the United States legally—in spite of the torture, imprisonment and execution of my family members.  Amnesty is not the answer. Amnesty simply rewards illegal behavior. The rule of law must be upheld.  We cannot allow migratory movements to determine our immigration policies.

MARIELENA STUART:  As a homeschooling mother, I believe that parents are the first and primary educators of their children.  As such, they should be free to send their children to the school of their choice or to homeschool their children without being financially disenfranchised by restrictive federal educational policies.  I believe in equal educational justice for all American families.  Let the tax dollar for basic services follow the child in support of parents’ educational decisions at the elementary and secondary school levels. I  will lead in eliminating the Federal Department of Education– and allow the states to handle public education, for those that wish access to it.

MARIELENA STUART:   I have a worldview of America—as such, foreign policy is a priority for me as U.S. Senator.

There are important parallels between Jihadist radicalism and atheism—the latter being the political religion of the 20th and 21st  centuries, in Socialist and Communist circles.   Jihadist radicalism and atheism are currents that show disdain for our Christian founding values  and Natural Law.   They pose the same threat as Communism and Nazism—and find a safe harbor in globalist circles—such as the United Nations.  I have been fighting against the United Nations for years through my battle against the  international Socialist program of Agenda 21 (Sustainable Development).  This is why I will lead the effort to expel the United Nations from the United States—and will do everything possible to stop the funding of this enemy of America.

America must continue to be the world’s military leader.  Much like our fundamental right to self defense and the right to bear arms is a means of sending a message of strength to the enemy— the same applies when it comes to a strong military.  When the rest of the world knows that we have the best and strongest armed forces on earth—they will think twice about attacking us, here or abroad.  We are Americans—and we have a long history of military strength.  We must not allow the Socialists and globalists in Washington DC to turn our nation into an anemic Socialist state—such as that favored by the pacifists in Europe.  In the event that military action is necessary– respect for Article I Section 8 of the U.S. Constitution must be observed, as it clearly states that Congress shall have the power to declare war.

America must have a strong foreign policy to withstand a protracted struggle against forces whose aspirations are centered on a One World Socialist government and a global Islamic caliphate—the latter aiming to establish its capital in Jerusalem.  This struggle cannot involve compromise or negotiated settlement.  We must assert our First Amendment right to reject and speak out against Sharia Law—without the federal government calling it “blasphemy”.   The same applies for speaking out against Socialism—because Socialism is Phase One of Communism.

As U.S. Senator I will lead in making sure that treaties and agreements with other nations do not harbor programs that undermine America morally and economically.  The days of countries syphoning money from America without accountability to the American taxpayer are over.  Those countries who come asking for money will have to show that they will join a new conservative movement that will shut the door on corrupt trade lobbyists and globalists that continue to put America in harms way.  I will put my foreign language abilities at the service of America, to get this message across to leaders of other nations.  This effort of reformation will undoubtedly take a long time—but we must begin immediately—if we are to save America, the greatest nation on earth.

America must lead morally, economically and militarily.  Without a strong and free America, there is no hope for the rest of the world.

MARIELENA STUART:  We must honor the promise made to those that have paid into the Social Security system; however, it is urgent that Americans promote and embrace a system of  private accounts—that cannot be raided by the federal government.  This also requires reformation, but it is a critical factor in moving away from dependency on the federal government.

MARIELENA STUART:   The greatest crisis facing underdeveloped countries today is not material poverty– but the imposition of population control programs by the United Nations and its member nations– including the United States.  I will lead in eliminating all U.S funding of the United Nations and will vigorously promote expelling the United Nations from the United States.   As U.S. Senator I will initiate and support forms of legitimate foreign assistance directed at increased food production and preservation, improved sanitation and clean water projects, expanded educational opportunities, true health care programs and other positive works–  designed to release demographic pressures (in case of a catastrophe or in support of population growth) that will insure a better life for the people.  I will lead in eradicating  the harmful presence of Sustainable Development (Agenda 21).  At the same time, I will vigorously oppose all tax-funded population control programs by the Agency for International Development (USAID) including programs for abortion, abortifacients, sterilization, contraception and anti-baby propaganda. Again, I ask all Americans to join with me in this important task.

ON AID TO THE POOR:

MARIELENA STUART:  The poorest and most vulnerable of our kin today is the unborn child.  Innocent human life in the womb is the subject of attack in almost every country of the world.  Eugenic abortion directed at eliminating unborn children in the womb who are suspected of carrying a debilitating disorder is especially vicious because it places a price on the head of every human being who is already born and finds himself handicapped by age or ill health.  It is impossible to talk about budget policies for the poor, without first protecting the right of the poor to even exist.  I urge all Americans to stand with me in opposing abortion and all-life prevention tax-funded programs at home and abroad in a universal campaign to insure the rights of the unborn.

MARIELENA STUART:  The term “religious freedom” is a poor criteria on which to base public policy especially since “religious freedom” can easily be used to justify unjust and perverted actions, policies and programs.   For example, “religious freedom” is currently being used to replace the “right to privacy” as a means of insuring open-ended abortion in line with the landmark Roe vs. Wade Supreme Court decision of 1973.  The basis for all public policies should not rest on ambiguous catch phrases like “religious freedom,” but rather on the Commandments of God and on the Natural Law which binds all men, for all times, and in all circumstances.

I want to be remembered on August 14, and always– as the woman who battled to bring authentic conservatism to Republican politics– by speaking the truth and standing firmly on her principles.  For never giving in to political expediency.  For being the only candidate in the 2012 U.S. Senate race in Florida that is 100% Pro-Life, without exceptions.   For loving America beyond what words can express– because America saved my life and put its Constitution in my hands, after the Communists in Cuba brutally beat me and left me for dead in a field—and denied me medical attention.

As a homeschooling mother I have traveled thousands of miles throughout Florida during the past year, with my husband and our two young children.  It has been a privilege and an honor to serve this great nation by bringing my conservative message to Floridians– and I look forward to standing on the floor of the U.S. Senate to continue my mission.

As a humble servant– and in order to accomplish this monumental task,  I have put myself  entirely in the hands of Almighty God– because it is in His hands that America rests.